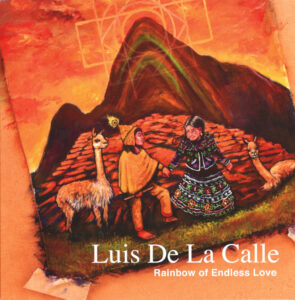 This album presents eight musical compositions of my own and three famous Japanese songs performed mainly on my flute innovations, the Chromatic Andean Pan Flutes made by bamboo (the smallest ones with 10cm to the biggest with 1.96cm) and The De La Calle Quena flute: the quena’s bamboo head-joint (the Andean flute) connected to the body of the European transverse flute made by wood. Some of my compositions are sung in Spanish while most of them are instrumentals played on the cello, violin, double bass, acoustic guitar, charango, tiple, piano, quena, cajon, drum set, bombo legüero and Latin percussion.

The album was recorded in Geneva (Switzerland) and arranged in New York (USA). The 8 originals I wrote for this album are in the style of “Peruvian World Music”, encompassing Peruvian rhythms (Afro-Peruvian and Andean music styles) fused with European harmonies from Classical music / Jazz / Pop .  Musical scales and metrics inspired by their similarities between Peru and the Asian continent have also been used: these scales and metrics have contributed aesthetically to the expression of emotions in each of these 8 musical compositions.

These compositions are inspired by a beautiful romance between a marvelous cowherd boy named Shyama and his beloved Radhika, two historical personalities described in one of the world’s most famous lyric poems written by the author Jayadeva. This romance, in which we also have experienced it in our lives, runs over through a selfless love that expects nothing in return and believes and tolerates everything: it is an intense love that overflows into its own spontaneity.

The following 8 musical compositions with their respective music styles are parts of the message from this album, “Rainbow of Endless Love”, where their music speaks even more than words:

1.- Sadness of Radhika (Andean pasacalle): The moon rose brightly in the sky. Radhika is lamenting for her delay in meeting Shyama. She ventilated her grief to her friend that if he is not here, how can she endure the sadness of separation?

2.- Before the Date (Huayno): Shyama is now waiting for Radhika in a cottage near beautiful bowers. Radhika’s companions said to her: “Please follow him happily and please listen to his melodious flute, which entices everyone. Don’t delay!

3.- Maid’s Desolation (Cueca): Radhika’s abode is now like a forest and she feels like lone deer. She is chanting “my Shyama, oh my Shyama” yearning for him: she is in desperate desolation for him.

4.- Showing My Love Deception (Panalivio): Radhika expresses her broken heart because Shyama was not with her the other day: she always wishes  him the best in whenever circumstances he would feel more happy.

5.- Shyam’s Beauty (Huayno): Radhika describes the beauty of Shyama: his black hair is decorated with peacock feathers beautifully; it is like a thick black cloud encircled by a colorful rainbow while he plays on his flute Mohana melodiously.

6.- Qhari (Landó): Radhika praises the bravery of his beloved Shyama who fought and defeated enemy warriors. His face shines like the disc of the sun and his love drives away, bringing all joy and peace.

7.- Loneliness from Separation (Huayno): Shyama was overcome with grief due to separation from Radhika who is suffering from the pangs of separation. She is restless due to the fever of love and is requesting him not to turn away his face from her.

8.-Falling in Love in Spring (Festejo): It’s springtime, and Radhika is desperately looking for Shyama. Radhika delicately describes the beauties of the spring season: fresh spring flowers like Jasmine inspire even the minds of shy women like her.

The album was rehearsed and recorded during the peak period of the pandemic: March, April and May 2020. Due to these circumstances, we have recorded it with affection and empathy for the victims of Covid-19.

The Record Collectors Magazine (the Japanese Billboard magazine), one of the most prestigious and popular music magazines in Japan, elected this album “Rainbow of Endless Love” (with the previous video clip), as one of the best albums of 2020, along with albums by Elton John, Elvis Presley, Eric Clapton, Charlie Parker, Santana, Bruce Springsteen, AC / DC, and Jimi Hendrix.

This album is dedicated to: God, my father (Beto De La Calle B.) and my mother (America Aramburu), and my Espiritual Master HH Jayapataka Swami, who was the inspiration to write these eight compositions.

Research Team on the Didactics of Arts and Movement (DAM)

You can find out more about which cookies we are using or switch them off in settings.

This website uses cookies so that we can provide you with the best user experience possible. Cookie information is stored in your browser and performs functions such as recognising you when you return to our website and helping our team to understand which sections of the website you find most interesting and useful.

Strictly Necessary Cookie should be enabled at all times so that we can save your preferences for cookie settings.

If you disable this cookie, we will not be able to save your preferences. This means that every time you visit this website you will need to enable or disable cookies again.